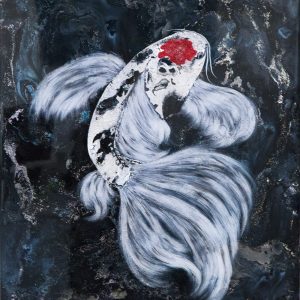 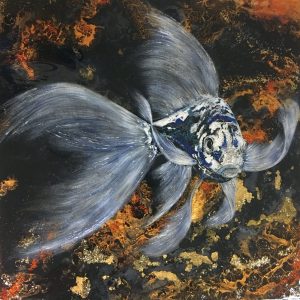 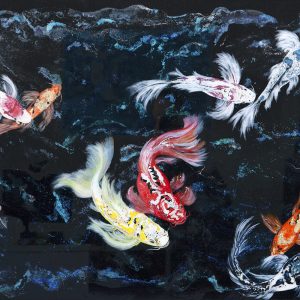 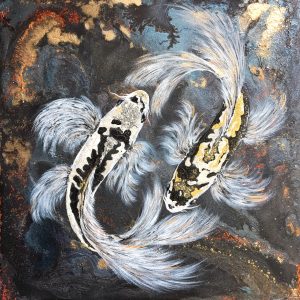 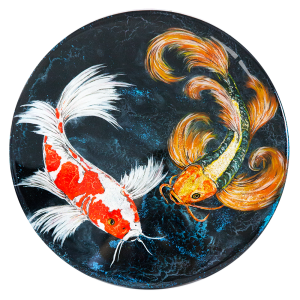 Many of the attributes of the koi symbolize several lessons and even trials individuals often encounter in life. The koi fish has a powerful and energetic life force, demonstrated by its ability to swim against currents and even travel upstream. Some of the characteristics associated with the koi include: Good fortune, Success, Prosperity, Longevity, Courage, Ambition & Perseverance.
Many of the above described symbolic meanings of koi fish stem from the Chinese legend of the Dragon Gate in which a koi fish swam upstream, through waterfalls and other obstacles to reach the top of the mountain. At the top of the mountain was the “Dragon Gate”. The legend says that when the koi finally reached the top, it became a dragon, one of the most auspicious creatures in Chinese culture.
In feng shui, the koi is tied to the yin yang symbol. In fact, the black and white tear drops of the yin yang symbol are said to be representations of two koi, one male and one female. The eye of each teardrop is symbolic of the constant watchful eye of the koi. This pairing of fish is often seen outside the context of the yin yang symbol as well. For example, a pair of koi is often used as a good luck symbol for a happy marriage.

Harmony and Happiness
The koi is synonymous with harmony and happiness. The two yin and yang koi complete each other and create a perfect balance of the negative and positive energies of chi energy, which is the life-force of all things on earth.