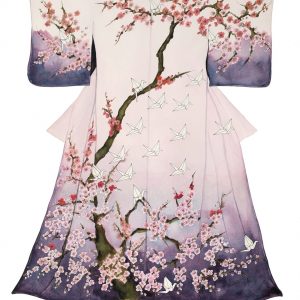 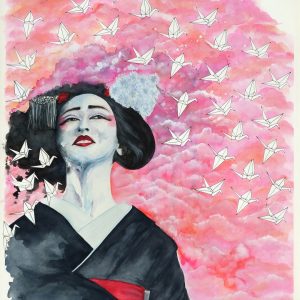 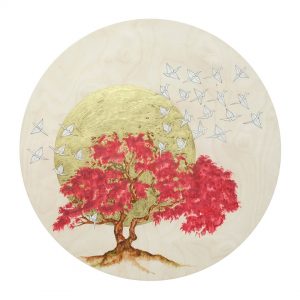 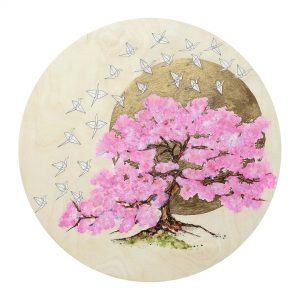 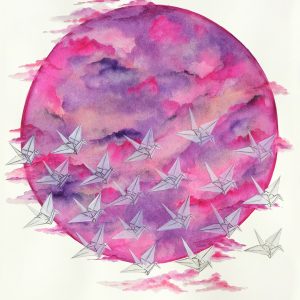 Sadako Sasaki was two-years-old when the world’s first atomic bomb dropped on Hiroshima, about two miles away from her home. Although many of her neighbours were killed instantaneously, Sadako survived the explosion, seemingly unscathed. However, below the surface and over the course of the next ten years, Sadako developed leukaemia. Many other children who were exposed to radiation from the atomic bombs developed leukaemia as well. In Japan, leukaemia was known as “the A-bomb disease.” While hospitalised, Sadako began to make origami cranes. Ancient Japanese legend Senbazuru holds that anyone who folds one thousand paper cranes, will be granted a wish. Inspired by the Senbazuru legend, Sadako set out to fold one thousand cranes. She wrote, “I will write peace on your wings, and you will fly all over the world.” Sadako continued faithfully and persistently to create these symbolic birds until the disease claimed her life at age 12 on October 25, 1955.

Sadako’s story, however, remains very much alive. After her death, Sadako’s school friends began to fold paper cranes so as to continue her legacy, and Japanese school children raised funds to build the Children’s Peace Monument in Hiroshima Peace Memorial Park; on top of a three-legged pedestal stands the bronze figure of Sadako. With outstretched arms, Sadako holds a majestic, golden crane. At the base of the monument, on a black marble slab, a wish is inscribed, “This is our cry. This our prayer. Building peace in the world.” The monument not only commemorates Sadako and the thousands of other children who were victims of the Hiroshima atomic bombing, but symbolizes the hope for a brighter future. To this day, children from around the world send hand-folded paper cranes to be placed beneath Sadako and her golden crane. The crane is now internationally-recognized as a symbol of peace.