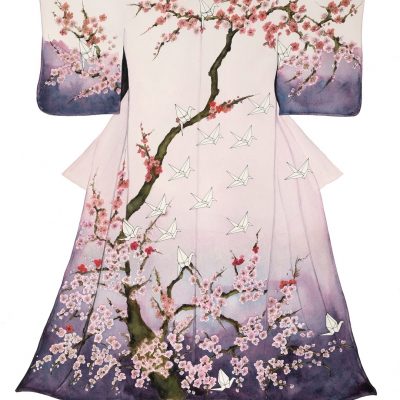 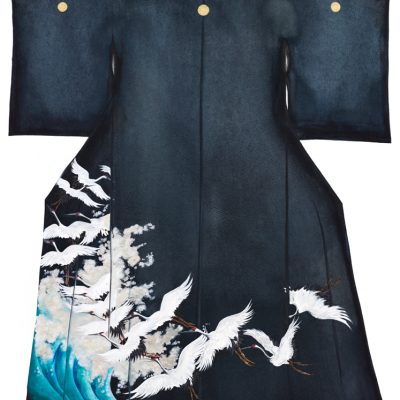 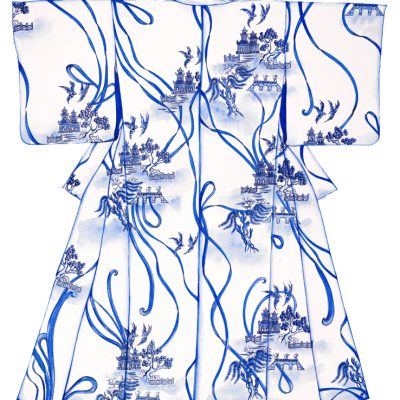 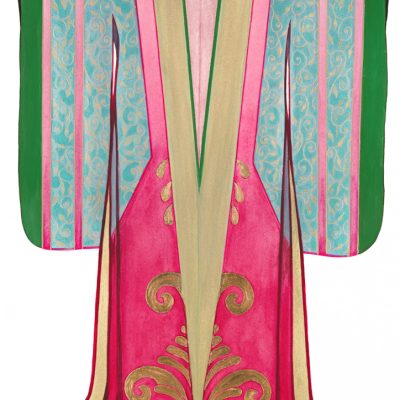 I have always been fascinated by the kimono. Not just for the beauty of the garment but for the fact that it is a work of art. Some kimonos are made with beautifully printed silk and others are actually hand painted for the kimono wearer and became family heirlooms to be passed down. A truly personal piece of clothing. So I have taken this beauty and transferred it to paper and canvas.
A Brief History of The Kimono
Perhaps the most recognizable Japanese article of clothing, the kimono’s humble beginnings date back to over one thousand years ago, during the Heian Period. Although it is no longer an everyday choice, this traditional garb is still worn for special occasions, such as weddings, funerals and tea ceremonies.

Clothing similar to the modern-day kimono started being worn during the Japanese Heian Period (794-1185). It was often worn with the Chinese-influenced hakama (a type of long skirt with or without a division to separate the legs, similar to trousers), or a type of apron known as mo. Later, it became fashionable to wear the kimono-style garment without the hakama. This meant the wearer needed a new way to hold the robe closed; and so the obi, the wide sash worn around the waist, was born.

By the Kamakura Period (1185-1333), the kimono had become an everyday clothing choice. Layering came into fashion. It is thought that this is when the traditional Japanese color combinations were born. These colors are usually based on seasons, gender or sometimes on political and family ties. The art of kimono-making grew into a specialized craft during the Edo Period (1603-1868). Some kimono were literal works of art and could cost more than a family home. People would keep their kimono and pass them down to the family.

Kimono were popular for many reasons, mainly for being versatile. They could easily be layered or altered to suit any season. Heavy silk kimono could be worn in the fall and winter, while the light linen and cotton kimono, known as yukata, could be worn in summer. Yukata are still commonly worn during seasonal summer festivals and fireworks displays (miyabi).

Since the Edo Period, men’s and women’s kimono fashions have remained pretty much unchanged. Eventually, however, the complexity of kimono-wearing and the cumbersome sandals they required became a hindrance. Kimono fell out of fashionduring the Meiji Period (1868-1912), when the government encouraged people to adopt Western clothing styles.

(Taken from The Culture Trip:  https://theculturetrip.com/asia/japan/articles/a-brief-history-of-the-japanese-kimono/)